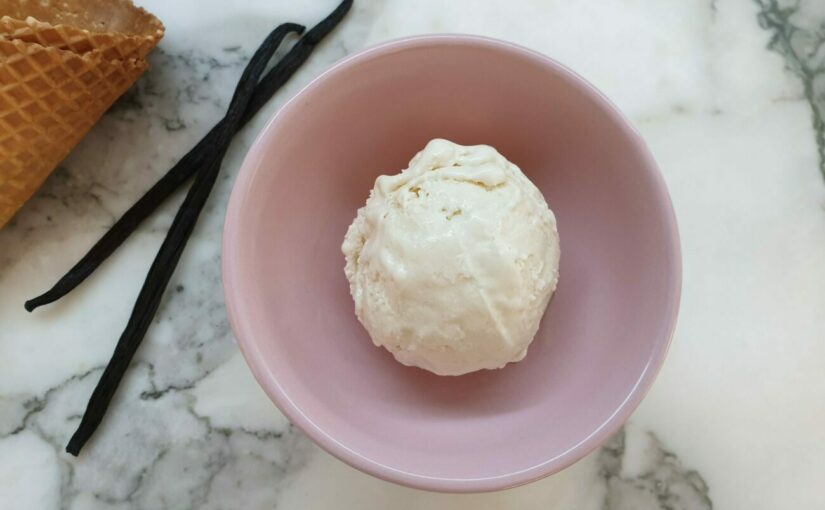 Sugar Free No Churn Vanilla Ice Cream is a simple to make but absolutely delicious ice cream recipe that doesn’t require the use of a churner. Having to buy a churner is just another added expense and gadget to fill your cupboards. You’ll discover that they aren’t necessary, especially when you have recipes like this one to make delicious ice cream.

The Reason This Ice Cream Works

While there are some less common ingredients in Sugar Free No Churn Vanilla Ice Cream, they are the reason this recipe is so amazing. In the past I have tried to make so many different ice creams and have never been happy with the end result. I believe that this is the best homemade ice cream recipe you are going to make.

This is another ice cream recipe where I emulated one of the best ones you can buy from the store. Although this Sugar Free No Churn Vanilla Ice Cream actually tastes better than the any store bought versions I’ve tried. You’ll also save plenty of money as it definitely isn’t going to cost you $13 for 500 gms/17 oz, which is what you pay for premium low carb ice cream in Australia. 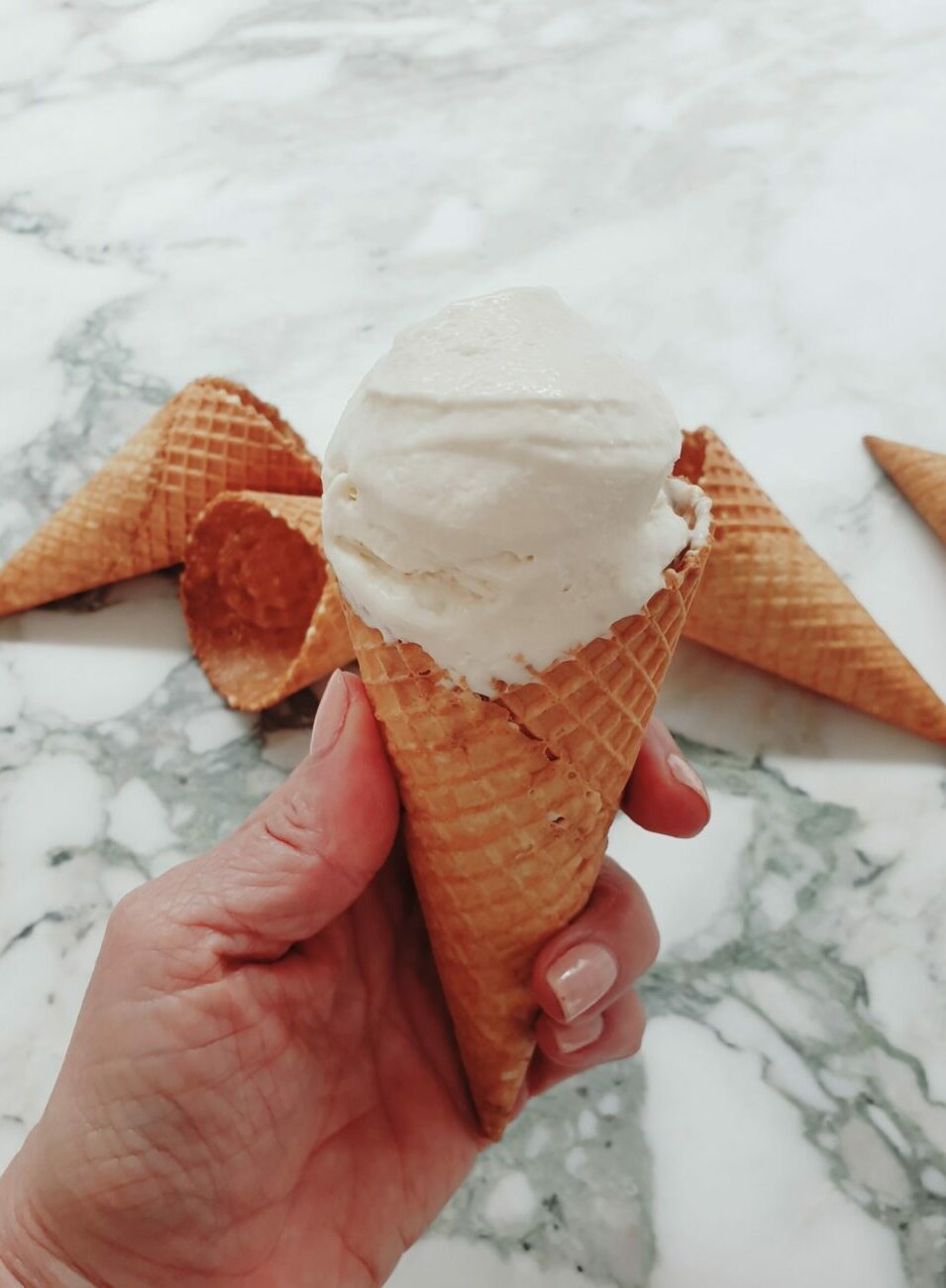 Where To Buy MCT oil and Guar Gum or Xanthan Gum

Regarding buying MCT oil and guar gum/xanthan gum, which are the stars of this recipe, you’ll find both at iherb and specialty stores. MCT oil is also available in some chemists and supermarkets as well. Some people get a laxative affect from using MCT oil but you can switch it for EVOO- extra virgin olive oil. You cannot taste the olive oil at all and it works brilliantly as a replacement in this recipe.

A feature of low carb and sugar free ice creams is that they do tend to firm up in the freezer. Unlike regular ice cream that you can pull out and scoop into straight away, you may need to let this ice cream sit at room temperature to soften a little. Trust me, it is going to be worth your wait!

The reason why xylitol is brilliant in ice cream recipes is because it doesn’t crystallize like other sweeteners do in the freezer. I’ve found that this vanilla recipe remains soft and creamy, so you probably won’t need to let it sit before you scoop it out. What’s going to impact on this though is what sweetener you use.

For anyone with dogs, please take care with xylitol as it can cause harm and kill dogs. I am an avid dog lover and have 2 beautiful schnauzers who I would never want to harm. Just as I’m careful with chocolate, as it can kill dogs, I make sure that I never leave food with xylitol around so they can reach it. The fact that I am not partial to sharing my ice cream with anyone, makes this easy to abide by.

I’ve given a lot of thought to the use of xylitol because of my dogs and refused to use it initially, out of concern for them. After giving this lots of thought I finally decided that I would continue to use it but would be cautious with it. I have had issues with dark chocolate with one of my dogs and it made her so ill we thought we would lose her. But even given this situation, it hasn’t stopped me from having dark chocolate in the house. What it has done is caused me to be more vigilant when the dogs are around. So dark chocolate and xylitol are back on the menu in my house.

Please feel free to share this recipe to your hearts content to help me get this recipe out into the big wide world.Please also share any photos of your cooking efforts as well, as I always love to see what you create at home.

Make sure you try the other fab ice cream recipes on the blog such as this Peanut Butter Choc Chip Ice Cream recipe as well as this delicious No Churn Chocolate Ice Cream.

I hope you enjoy this one as much as I do! 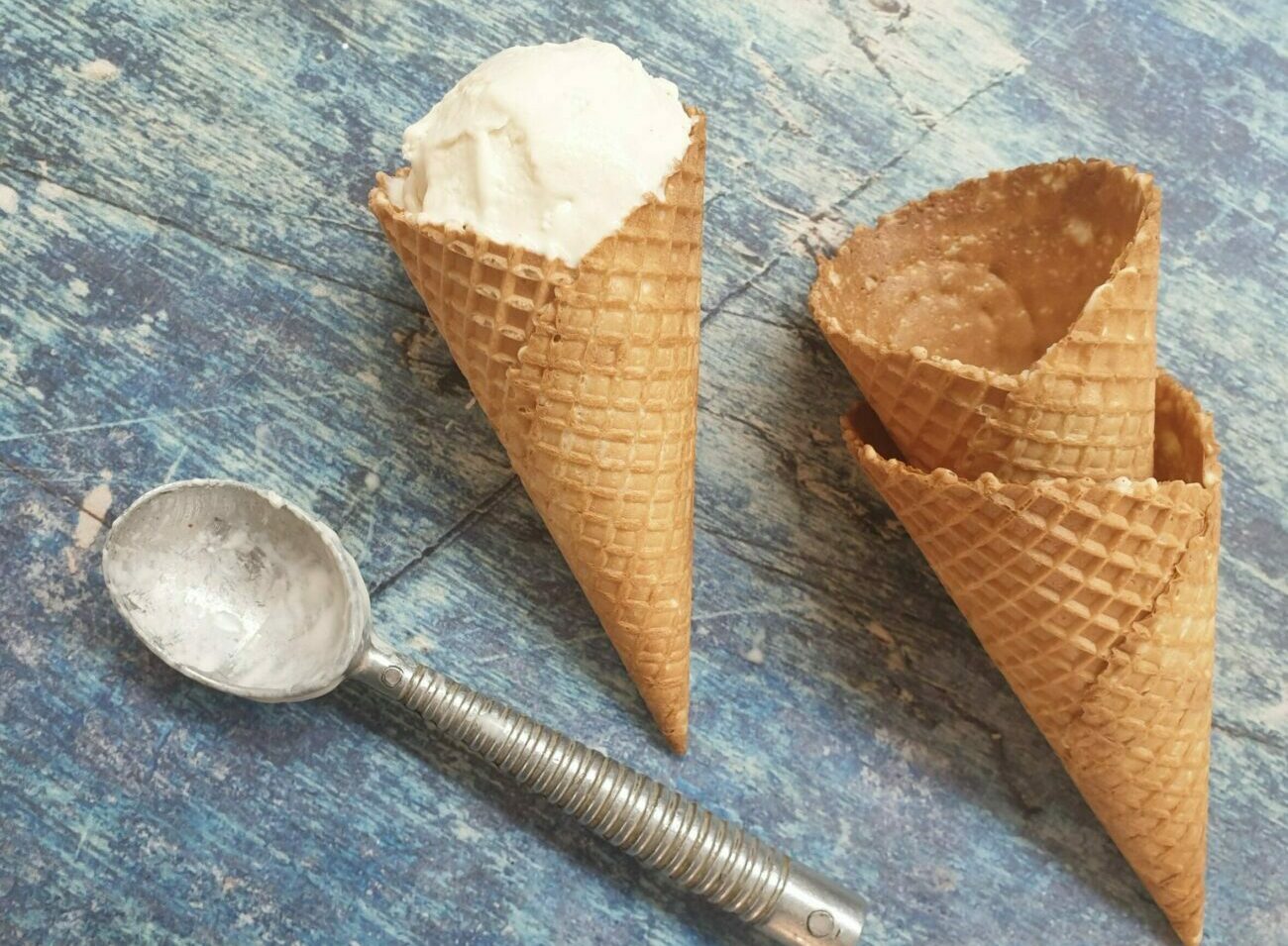 This recipe was made to be no churn ice cream so you don’t need an ice cream maker. The ice cream can be made in the churner if desired by following your churners instructions once it has been created following the instructions above. If you want a creamier ice cream, make sure you use coconut cream instead of coconut milk. Coconut milk will reduce the calories slightly but the end result will be slightly icier and not quite as creamy. Coconut cream (my favorite) is creamier and richer in flavor. For a dairy free/paleo version,  simply switch the pure/heavy cream for coconut cream, following the exact same steps. You're coconut cream won't whip up like cream will but this still works beautifully. You can also use an alternative sweetener but your icecream won't be as creamy as it would be by using xylitol. If you don’t have guar gum, try adding ½ teaspoon of xanthan gum in its place. Guar gum is preferred if possible.  Ensure you accurately measure the guar gum or the xanthan gum before adding one of them to the recipe. If you use too much, your ice cream will end up being too claggy.  Although testing showed excellent results using a range of sweeteners, xylitol is the best sweetener to use in ice cream as it doesn’t crystallize when frozen. If you use an alternative sweetener, there is no guarantee that the end result will be the same as it would be if xylitol was used. You can replace the xylitol with the equivalent amount of erythritol or about ¼ cup of a stevia or monk fruit blend. Taste the ice cream mixture so you can adjust the sweetness to your own taste. If you don’t have MCT oil you can simply omit. Try switching it for the equivalent amount of EVOO- extra virgin olive oil, as long as it is a light tasting EVOO and not "light olive oil." This will help prevent your ice cream from icing up and create a smoother texture. You will not be able to taste it.

Serving: 1of 12 serves | Calories: 289kcal | Carbohydrates: 1.9g | Protein: 11.7g | Fat: 19.8g
Note that we calculate our own nutritional values so they may not be precise. Calculate your own if desired. Carb values exclude sugar alcohols such as Erythritol, as they generally have no impact on blood sugar levels. 50% of the carbs from Xylitol is added to nutritional values. This is consistent with industry practice.
If you liked this recipe, let us know what you think!Mention @alowcarblowsugarlifestyle or tag #ketohh
Do you want to receive more recipes like this one? Subscribe to our newsletter now!

Hi, I’m Karen and I’m a recipe blogger from Australia. I love developing recipes to suit my lifestyle as I’ve been keto for over 6 years now and lucky for you, I love to share them!