Yoghurt on a Low Carb Diet 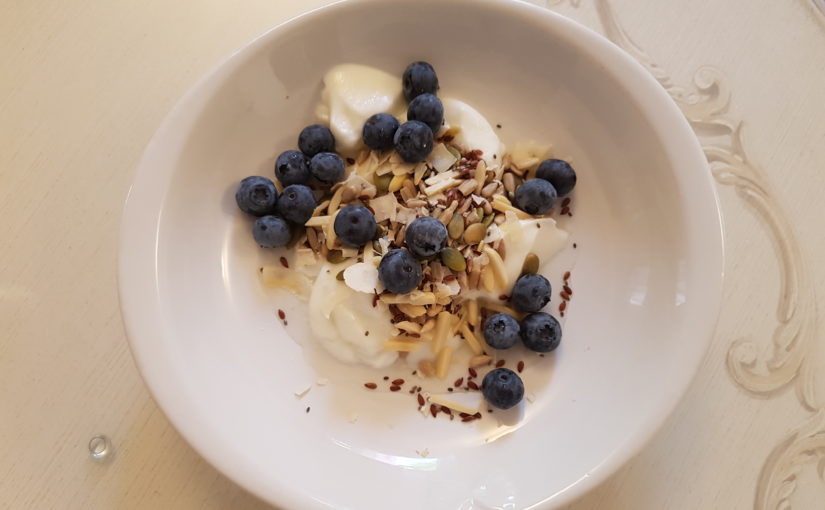 Yoghurt on a Low Carb Diet

Can you eat Yoghurt on a low carb diet?

Is Yoghurt suitable for a low carb lifestyle, particularly one where you are seriously reducing your carbs? It can be very confusing, given that you should be avoiding milk and yoghurt is made from milk so surely that means it is off limits as well. Well there is good news for you, and it simply comes down to making wise choices. You certainly shouldn’t be eating the low fat, sugar and fruit laden overly processed yoghurts that dominate the market but you can add the creme de la creme of yoghurt into your diet- plain Greek style full fat yoghurt. So yes, you can eat yoghurt on a low carb diet.

Being able to eat Greek Yoghurt doesn’t mean that you can eat as much as you want to, especially if you are sticking to a keto or very low carb eating plan. You may have to watch your serving size and limit it so it fits in with your macros. It is possible to do though. Some people also find that eating dairy can cause weight gain or stalling so if this impacts on you, you may also have to watch your intake.

For anyone who cannot eat dairy, there are some yoghurt variations available such as coconut yoghurt. If you are watching your carbs then please make sure you read the label of these products as they are often thickened with products such as tapioca flour etc, which can push up the amount of carbs per serve. They often have sugar added as well so just make sure you know what you are buying.

The differences between the various yoghurts is quite distinct. You can generally decrease the amount of lactose in yoghurt if it has been fermented for longer- this is one of the benefits of making your own yoghurt as you can ferment it for as long as you want to. Plain Greek yoghurt is the best low carb yoghurt option as it is higher in protein but lower in carbs. This is followed closely behind by plain, natural full-fat yoghurt (although it only has about half the amount of protein in comparison to Greek style,) so my first choice would still be eating the Greek style option. A lot of the carbohydrates are poured off with the whey in Greek yoghurt which is why the carbs are lower and there is also an increases in the amount of protein. In a 180 gm serve of Greek yoghurt there is an average of approximately 6 gms carbs. The same serve of plain full fat yoghurt has approximately 8 gms of carbs; low-fat plain yoghurt has approximately 12 gms of carbs and non-fat yoghurt has approximately 13 gms. The low-fat and non-fat versions often try to make up for a more watery flavour by adding sugar, fruit, thickeners etc to improve the taste which is why they are to be avoided.

When buying yoghurt make sure you read the labels and look for the lowest carb option available with the least amount of preservatives. Choose a plain flavour and add your own toppings to it, that way you can control exactly what you will be eating. Adding low carb fruits such as berries is delicious and I love creating a bit of crunch by adding muesli (KETohh of course) or nuts and seeds. Yoghurt is also a great base for smoothies, dips and marinades. It is something I always have in the fridge and has many a time been a great fulfilling snack if there isn’t anything else in my cupboard to munch on.

I eat about half a cup of yoghurt nearly every day and I make my own yoghurt when I have time. It is so simple and easy to make and trust me when I say it will be one of the best yoghurts you have ever eaten. I’m quite certain it isn’t going to be hard to convince some of you to jump on this band wagon. Have a read of this yoghurt recipe to find out how easy it is to make your own. On the other hand, there are some great commercially produced yoghurts out there to choose from so don’t ever feel guilty about buying it.
https://ketohh.com/making-your-own-yoghurt/

For some other recipes where yoghurt is used or that go well with yoghurt, have a look at the following recipes. Raspberry Protein Smoothie, Blackberry Chia Protein Smoothie and my recipe for Moroccan Chicken Salad.

It’s time for breakfast for me!! Greek Yoghurt with fresh raspberries and some low carb muesli of course.
Enjoy
Karen